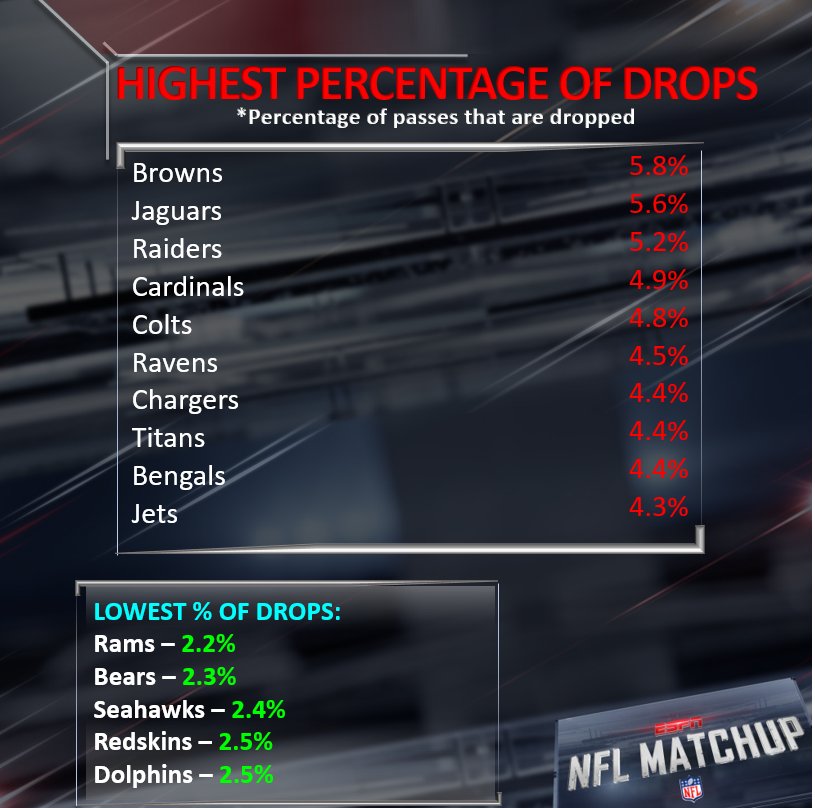 The Jets are 10th in the league in percentage of dropped passes, which is an indication of a few things.

First is that the Jets aren’t very good at the wide receiver position. Robbie Anderson is a nice compliment player but can’t be consistently relied on to be a number 1 receiver. Quincy Enunwa is a solid player but is best suited to play in the slot as a bigger possession receiver. Then Jermaine Kearse is also best at exploiting the middle of the defense and even at his best doesn’t strike fear into any opposing team.

Another factor is the fact that the Jets receivers have been struck with the injury bug, Kearse has missed a game, Anderson has missed 2 games and Quincy has missed 2 as well. This wouldn’t have been the end of the world but Anderson and Quincy were out at the same time, right in the middle of the Jets downward spiral. With those two out Maccagnans inability to draft was on full display as the lone receiver he drafted that was active for the game was Charone Peake, who is at best a mediocre special teamer.

Lastly this stat could be a result of poor passes. It’s been no secret that Darnold has struggled with his accuracy at times this year, completing just 55% of his passes and leading the league in INTs.

I haven’t done much research on the upcoming draft or free agent crop but the Jets need to address their skill positions. Quincy is in the last year of his contract and their attempts to replenish the position through the draft over the years has proved worthless. I’ve seen some reports that Maccagnan’s job is safe which seems insane considering all you need to do is look back at his previous drafts to see half the people he drafted are no longer in the league. It doesn’t matter who is calling the shots this upcoming year the most important thing is that they get Darnold some help, cause who they have now isn’t cutting it.